The Quantitative Beatings will Continue Until Economy Improves

The Fed’s purpose, when it comes down to it, is to buy bonds. Under their various “Quantitative Easing” (QE) programs, they sure have bought a lot of bonds. This pushes up the price of the bonds. Since the yield is basically the inverse of the bond price, this means the rate of interest falls.

These past few months, on rumors that QE will be tapered off and despite continued Fed bond buying, the yield on the 10-year Treasury bond has spiked from 1.63% to 2.72%. Will this be the end of the bull market in bonds and the start of rising interest rates in the US in earnest? I rather doubt it, as all of the dynamics that have created this bull market are still in place. And as the other bond markets of the world experience greater trouble (such as Japan today), capital will come pouring into the dollar and the Treasury. It has been quite a bull market in bonds. Here is a chart of the yield on the 10-year Treasury.

The recent blip is hardly noticeable on this chart, which shows the fall from 16%.

This is all good, right? It’s a bull market, so people are making money. The cost of borrowing to finance a new business is near its all-time low. The deficit to GDP ratio is kept in check by low interest payments too, as any Keynesian will tell you.

In the spirit of the boy who said, “The emperor has no clothes,” let’s ask a question. Where do the profits of the bond speculators come from? Who is on the other side of the trade? Who sold the bond short?

The borrower, who sold the bond, incurs a capital loss as the bond speculator gets his gain. Changes in the bond price are zero-sum: one side loses and one side gains. While they can borrow more money at a cheaper rate tomorrow, they can never make up the loss on the money borrowed at a higher rate yesterday. Their burden of debt rises as the rate of interest falls.

How does this manifest in the economy? A competitor can enter the business more easily. If the interest rate is lower, that means he can borrow the same amount of money and have a lower monthly payment. Or he can borrow more and have the same payment. Either way, he has a sustainable competitive advantage over the established business. If the rate falls again, then another new competitor can enter the market. The established business is pushed into bankruptcy, the first new competitor is on the ropes, and the newest is doing well. That is, until the next decline in the rate. The penalty for borrowing at a too-high rate is harsh.

This is certainly not good for the economy. To the extent that new money goes into the productive sector at all, it may be used to cannibalize existing businesses. The old debt is defaulted, and net debt increases slightly as the new loan is bigger than the old one. Churn is not real activity.

Even more pernicious, our endless non-recovery is not in spite of the Fed’s effort, but because of it. The interest rate is not exclusive to just one business. It is universal, applying to the whole market. Every business can borrow at the prevailing rate. When will they borrow? To oversimplify slightly, they will borrow when they see an opportunity with a net profit greater than the interest rate. This will push down the rate of profit of their market. The actions of a myriad of other businesses will push down the rate of profit in every market.

Let’s pause to consider this for a moment. The rate of interest is falling. This invites businesses to incur more debt. At the same time, their opportunities to profitably deploy the borrowed money are declining due to the very reason of falling interest rates.

The falling interest rate not only sucks capital off their balance sheet and threatens them with death by competitors who wait for a lower rate, but it encourages more leverage and makes them more fragile by lowering their profit margin. Who in their right mind would go deeper into debt for a reduced profit and a longer time to amortize the debt?

The Fed can no more improve the economy by buying bonds than a boss can improve morale by punishing employees. Their low interest rate forces the economy down into the mud and keeps it pinned. The Fed purportedly helps stabilize the economy compared to the gold standard, but it really achieves the exact opposite.

The chief virtue of the gold standard is that it keeps the rate of interest stable. Look at this long-term chart that goes back to 1790. There are spikes due to wars and policy blunders, but it is striking how stable it was prior to 1913 especially in comparison to the era of the Fed. 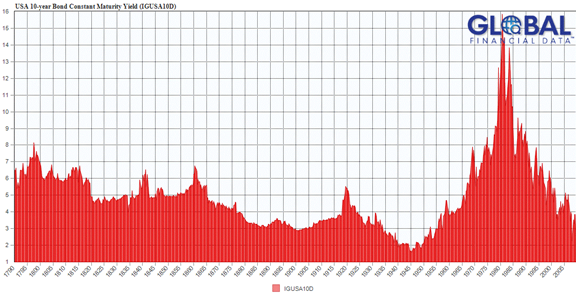 Today, the saver is disenfranchised. If he does not like the rate of interest, he can complain, but there is not much he can do, short of speculating on commodities or stocks. According to many sources I read, pension funds are becoming more underfunded. Why? It is because the net present value of the payout they must make to retirees is rising (as a mathematical function of lower interest), while their ability to earn a yield is falling.

Under gold, if the saver did not like the rate of interest he could sell the bond and take home the gold coin. His preference sets the floor under the rate of interest. No yield, no lending. No lending, no bonds can be sold. So the rate was forced higher. (There was also a ceiling, but the mechanism is only of academic interest today with falling rates.)

Stable rates preserved the saver’s ability to earn a yield, and also protected the capital of borrowers.

How do savers today expect their money to work for them so they can retire comfortably? Those with a defined-benefit pension plan don’t worry about it; they have outsourced the problem of finding a yield to third party money managers behind an opaque structure. As I noted above, most are badly underfunded and the prognosis is that underfunding will become worse.

Everyone else has a choice of believing in one or another myth. The first myth is that everyone can become a great trader, who is nimble, quick, and has superior and timely information. Burt Malkiel wrote a book called A Random Walk Down Wall Street, which debunks this notion. The average investor will not beat the market average. Net of costs and fees, he underperforms.

The other myth is that stocks and other assets will go up and up without limit. So one simply must buy and hold. Then the capital gains will pay for a comfortable retirement. This plan is no more feasible than the first.

The only thing that can pay for retirement is the return on capital put to productive use. This is a serious problem in our era of wholesale capital destruction.

Another reason why rising prices cannot pay for everyone’s retirement is unique to gold. A rising gold price is not a gain. It is just an artifact of using a falling dollar to measure gold’s value. If you have an ounce of gold, and the price doubles to $2800, you have twice as many dollars, but each of those dollars is worth half as much. You still have one ounce of gold. Only if you make a profit by earning more gold do you have a gain. While this was how people made a profit 100 years ago, today few are even thinking about how to do this.

It is high time they started again.