Despite some government interference, the Classical Gold Standard enabled a Golden Age of prosperity and full employment that is totally out of reach today (not to be confused with the rapid development of technology).  This is not to say there were not business failures, bank failures and panics – what were later called depressions and now recessions.  A free market does not attempt to guarantee that no one can ever lose money.  It is merely an environment in which no one is forced to subsidize someone else’s risks or losses.

Unfortunately, by the early 20th Century, the tide had shifted.  Europe was inexorably moving towards war.  The US was abandoning the principles on which it had been founded, and exploring a different kind of government: an unlimited government that could centrally plan and manage the economy and the lives of the people.

In 1913, the US government created the Federal Reserve.  Much has been written about this now-hated organization.  At the time, the Fed was supposed to be the re-discounter of Real Bills.  Real Bills arose spontaneously in the market centuries before banks or central banks.  They are credit used for clearing.  When a wholesaler delivers goods to a retailer, the retailer accepts the goods and signs the bill.  Commercial terms were commonly NET 90.  It turned out that in the free market, these bills would circulate as a form of currency, with a value that was based on the discount rate and the time until maturity.  Real Bills were the highest quality earning asset, and the highest quality asset except only gold itself.

For many reasons, politicians felt that a quasi-government agency could make better credit decisions than the market.  To “discount” a Real Bill was to pay gold and take the Bill into one’s portfolio.  The Fed, as re-discounter, would offer the banks unlimited liquidity in exchange for their bills.  Almost immediately, the Fed also began to buy US government bonds.  What better way to expand credit than to push down the rate of interest?  The Fed could use much more leverage than if they were restricted to buying bills (which would all mature into gold in 90 days or less!)  This time, they thought, there was no limit to how far down they could push interest, nor for how long.

The Fed almost certainly enabled the government to borrow at lower rates than would otherwise have prevailed, but even so the rate of interest rose during World War I.  This is because the government was borrowing unprecedented amounts of money.  The interest rate peaked in 1919.  Then it began to fall, not bottoming until after World War II.

The net effect of the Fed was to totally destabilize the rate of interest.  In looking at this graph of the 10-year US Treasury bond from 1790 to 2009, one thing is obvious.  There were spikes due to wars and other threats to the stability of the government.  But for long periods of time, the rate of interest moved in a narrow range.  For example, from 1879 until 1913 (i.e. the period of the Classical Gold Standard), the rate of interest was bound to a range of 3% to 3.5%.  During World War I, the rate spiked up to 5.5% and then began to fall to well under 2% after World War II.  Then the rate began its ascent to over 17% in 1981.  After 1981, the rate has been falling and is currently under 1.7%.  It will continue to fall, but that is a discussion for another paper. 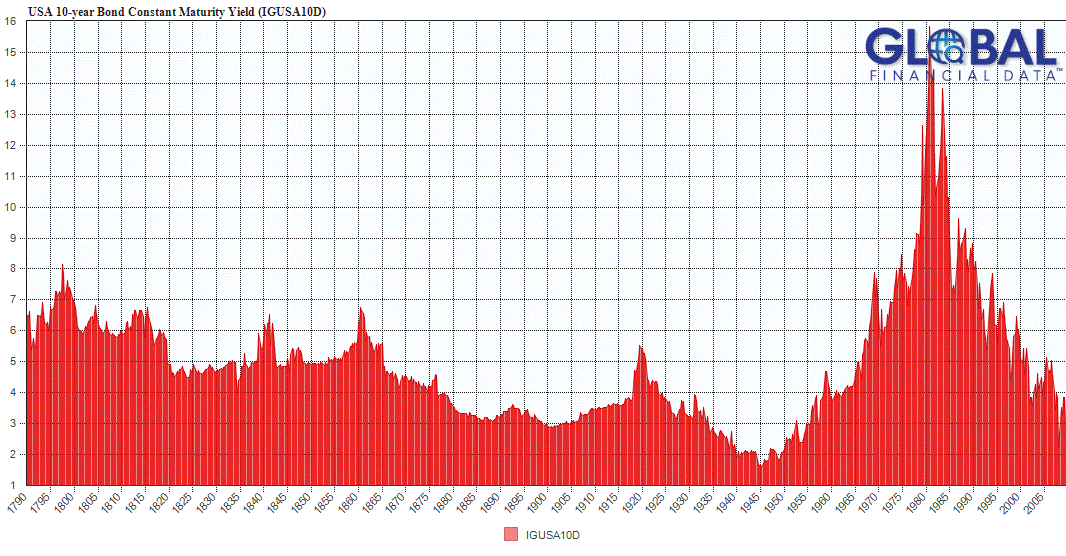 The US, unlike Europe, did not suspend redeemability of the currency into gold coin.  In Europe, the toll of the war in terms of money, property, and of course lives, was much higher.  The governments felt it necessary to force their citizens to deal in paper money only.  After the war, they had problems returning to gold.  For example, Germany was prohibited from freely trading with anyone.  One consequence of this was that the Real Bills market never reemerged.

In 1925, Britain initiated a short-lived experiment: the Gold Bullion Standard.  The idea was that paper money would be backed by gold, but the gold would be kept in the banking system in the form of 400-ounce bars.  Technically, the paper was redeemable, but the bars were so large that, for all practical purposes, the money may as well have been irredeemable to ordinary people.  Britain abandoned this regime in 1931, in part due to gold flows to the US.

In 1933, the President Roosevelt told American citizens that they must turn in their gold for approximately $20 per ounce.  Once the government got all the gold they could, Roosevelt revalued gold at $35 per ounce.  The dollar was never again to be redeemable to Americans.

After World War II, Europe was physically and financially devastated.  European gold had largely moved to the US either because of the coming war, or to pay for munitions.  The Allied powers knew by 1944 that they would be victorious, and so met at Bretton Woods to agree on the next monetary system.  They agreed to what could be called the Gold Exchange Standard.

In this new standard, the US dollar would be the reserve asset of the central banks and commercial banks of the world.  They would end up with dollars on both sides of their balance sheets, and pyramid credit in their local currencies on top of this reserve.  The dollar would continue to be redeemable to foreign central banks (but not to US citizens).

This regime was unstable, as economists such as Jacques Rueff and Robert Triffin realized.  Triffin proposed that there is a dilemma for the world and the US.  As the world demanded more money, this meant that the US had to run a trade deficit to provide the currency.  But a chronic trade deficit would cause the value of the dollar to fall, with wealth being transferred from foreign creditors to domestic (US) consumers.

Throughout the 1960’s, European central banks, and most visibly France, redeemed dollars.  By 1971, the gold was flowing out of the US at a rate of over 100 tons per day.[1]  President Nixon had to do something.  What he did was end the Gold Exchange Standard and plunge us into the worldwide regime of irredeemable paper money.

Since then, it has become obvious that without the anchor of gold, the monetary system is un-tethered, unbounded, and unhinged.  Capital is being destroyed at an exponentially accelerating rate, and this can be seen by exponentially rising debt that can never be repaid, a falling interest rate, and numerous other phenomena.